This is the toughest thing about ADHD 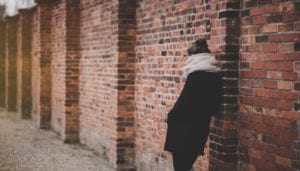 There’s one really tough thing about having ADHD.

It’s a secret that only another ADHDer understands. No matter how hard you try, you can’t explain it to anyone else. It happens throughout the day, every day. I’m talking about bumping into walls all day. No, not literally (but that happens, too).

Even though you may be a klutz who drops your keys, trips over your own feet, and spills your drink; the bumping I’m referring to is not physical, it’s mental.

If you’ve got ADHD, you know how it goes. You start a task that needs to get done, and then BAM! Something clicks in your brain, and in a split section, you’re facing a brick wall that you can’t climb over or get around, no matter how hard you try.

Whether you’re staring at a computer screen, textbook, or a piece of paper, making a necesarry phone call, you’re stuck and can’t move forward. You know what has to be done, but you’re frozen. Your brain doesn’t register what you see. There’s a blockage (the huge brick wall) between knowing what needs to get done and getting it done.

Or sometimes, you’ve got a job to do; you get started but suddenly something happens that gets in your way. This happens often when you’re trying to fill a prescription. It goes like this: you need a Wellbutrin refill but when you call the pharmacy, they tell you that you need a new prescription from the doctor. So you call the doctor’s office to get a new prescritpion but they tell you they can’t give you one because you need to come in for an office visit. The problem is that they don’t have any appointments for two weeks. By that time, you’re starting to feel withdrawl symptoms. You’re agitated, tired, and sluggish. You try waiting two weeks for the appoiontment but you’re feeling so bad you can’t it anymore. You call the doctor and beg for an immediate appointment. They see you the next day. You get your prescription, take it to the pharmacy and anxiously wait for the drug to work again. Two weeks later, you finally start to feel stable again.*

Some people call it laziness, apathy, overwhelm, procrastination, lack of motivation, or distraction. They can call it whatever they want- the bottom line is- tasks are harder when you have ADHD. Getting through them is a struggle (that’s invisible to others). Tasks take longer to complete. They cause anxiety, self-doubt, avoidance, fear, obstacles we have trouble getting through, which only creates more problems.

You Can Break Through The Walls of ADHD

You can learn how to break through these walls. But first, you have to know when you’re hitting the wall and what happens to you (individually, each person is different) before you become mentally paralyzed.

With a daily routine of self-care and awareness, either on your own or with an ADHD Coach or therapist, you can burst through the blockage and make your life a whole lot easier than it is.

*The non-ADHDer is saying- None of this would have happened if you would have planned in advance, marked your calender or set an alarm to call the pharmacy. That sounds like a great idea. But that’s not ADHD works. Our hyper-active, over-loaded, data filled minds make it hard to prepare. And anyway, the pharmacy would probably tell you that it’s too early to refill. Your insurance company doesn’t allow you to receive it before it’s due the next month. Brick wall!!!!

Do you know when you hit a wall? Or what stops you from moving forward? Please comment and tell me your story.

Contact me for a free 30-minute ADHD Coaching consultation.